A new version of one of my favourite free imaging program has just been released.

The program, FastStone Image Viewer, has been mentioned in these columns before and is available from the website FastStone.org. I use it every day even though I own copies of Photoshop and Lightroom, because it is the quickest way I know to look through a lot of digital pictures.

I bought FotoFusion Scrapbook Essentials a little while ago and have been creating a few layouts with it. This one was done as the icon picture for my Flickr set containing pictures from a gig I went to a little while ago. 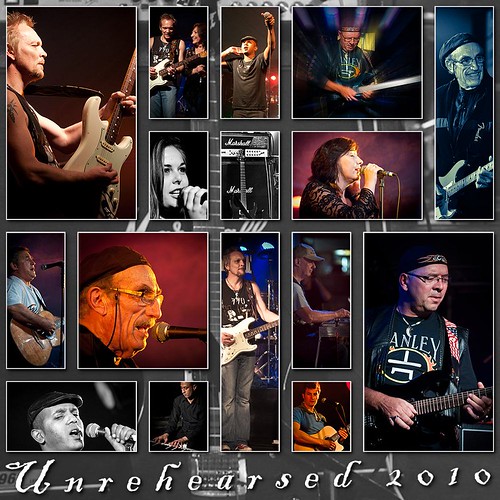 I reviewed the package on my computer blog a few weeks ago.

An interesting package arrived in the post the other day from Adobe’s PR company.

It was a copy of the latest version of their Lightroom package, Version 3, which reminded me that I have never really discussed it in these pages.

Read moreLights on in the room

Over the past few weeks I seem to have had a mini-season of columns on the topic of what to do with digital images.

Before going on to something else, however, I thought I would mention a specialised little program called LumaPix FotoFusion. It is designed solely for creating layouts for photo books, greetings cards, business cards, models’ Z-Cards, or whatever else you can think of to do with it.

Layouts can be as complex…

Some exciting news in the few weeks was Adobe’s launch of the latest version of their entry-level image manipulation program Photoshop Elements.

Available simultaneously on the PC and Apple Macintosh platforms, Photoshop Elements 9 is the latest in a line of products that was brought out to fill the gap in the market for a less costly and less complex version of their industry-standard Photoshop application.

And so on to another in my occasional series on things to do with your digital photos. I have mentioned making photo books before and there have been a number of services available, but now I have found another South African source of high-quality books and has its HQ in Durban.

It’s called Burblepix and offers a range of photo products and a free Burblepix program to be used to create them with. On offer are photo books ranging from a 24-page 148 mm square soft cover, at R195, to a 24-page 300 mm square hardcover book for R530. Extra pages can be added to any book but cost extra.

The cover of the book I made using Burblepix.

In previous columns I’ve mentioned a suite of free Microsoft programs called Windows Live Essentials and new versions have just been launched for 2011.

The programs in the suite include Writer, Photo Gallery, Messenger, Movie Maker, Family Safety, Mail and a few other things. One new and interesting addition is Windows Live Mesh which allows you to synchronise folders between a number of PCs connected to the Internet and/or folders stored on Microsoft’s online SkyDrive storage facility.

Programs come and go and I generally resist change for change’s sake. Of course, I often do make the change to new software and it’s usually because of some huge and miraculous new feature which has been introduced. Sometimes though, it’s a tiny little tweak that takes my fancy and gets me to change.

There is no doubt that Microsoft Word 2010 is a good-looking package with all the bells and whistles that you might reasonably require, but I wasn’t really tempted to move over to it and abandon my venerable and well-used copy of Word 2000. Not, that is, until I noticed that Word 2010’s status bar includes a running total of the number of words in the document.

It’s not a huge thing but, for me it is pretty darn cool, and the straw that broke the camel’s back and persuaded me I needed a new wordprocessor. Now all I have to do, is figure out how to make it the default program for opening .DOC files because Windows still insists on opening them with Word 2000, no matter how often I tell it not to.

Having a continuously updated idea of the number of words I’ve used is great although it’s perhaps not quite as cool as the hack done by a fellow computer scribe, so that his copy of Word displayed not only a running word count, but also how much he would earn from them at his usual rate per word.

Once upon a time I was driven mad when I kept hitting the Caps Lock key on my keyboard and having to go back and correct my typing.

i WOULD REGULARLY MAKE MISTAKES LIKE THIS and things got so frustrating that I decided I would have to do something with some urgency. Various solutions suggested themselves to me including ripping the Caps Lock key off of the keyboard or gluing it so that it couldn’t move.

A couple of weeks ago, a copy of Microsoft Office Home and Business 2010 arrived for review.