No doubt about it, Brisbane is a very pretty city with some spectacular river views. I’m very pleased with this multi-shot panorama that I stitched together in Photoshop.

I seem to be doing a fair bit on panoramas lately. One of the first articles I wrote concerned how to shoot them and I wrote that you had to shoot a series of overlapping pictures. The picture below shows what a series of images looked like before and after I had stitched them.

One of the problems with shooting a panorama  is remembering months down the line, which images are a sequence. Shooting a picture of your hand at either end of the sequence is a tip I picked up on another blog (can’t remember which one) and is a neat way of separating panos from each other and from other pictures shot on the day.

I’ve been fiddling with panoramas again and came up with this one of Durban’s new Moses Mabhida Stadium on the night Nigeria were playing South Korea in the 2010 Soccer World Cup. We were on the old Mutual Building in the centre of town and looking north to the stadium and, past that, up the coast.

The picture is made up of eight shots stitched in PS CS3.

I have been trying out a number of different packages for creating panoramas and will be posting in the next week about a really cool free option I’ve found.

My previous posts on panoramas can be found here, including hints on how to shoot them.

** More of my stadium pictures here. 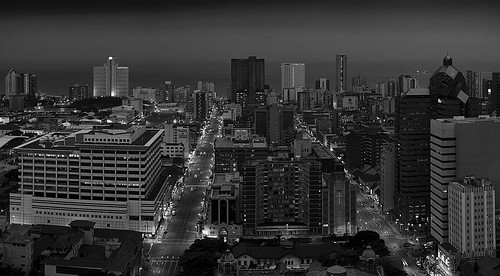 Things have been a bit quiet on the photographic front. Not so much on the taking, as on the processing side. Nevertheless, I did like this one taken at the weekend on a trip downtown. It’s made up three of stitched images and would have made a much wider panorama, had not the fourth picture been as soft as something out of a Canon 😉

I should have shot a couple more safety shots but it came on to rain and there was plenty of lightning around, not the healthiest time to be one of the highest points in the city.

I have been shooting quite a few panoramas lately, including the one above and the one at the bottom of this post. 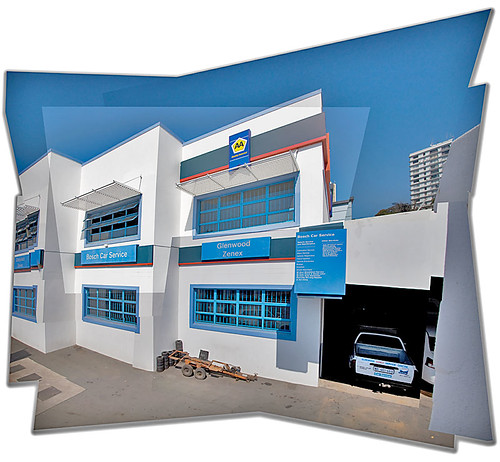 Sometimes I produce a picture and I can’t immediately think if I like it or not. This was a very sloppily shot pano, consisting of about six separate pics, and did not produce an accurate stitch. It’s quite an interesting effect but I’m undecided. Apart from everything else, I’d probably battle to reproduce the effect.

I did an earlier post on pano stitching software.

The most accurate way of shooting a panorama is to use a tripod and a device so the camera swivels on the lens’ nodal point – see nodalninja.com for an example.

Connecting the tripod directly to the camera’s tripod socket does introduce some parallax error into your panorama so you need a panorama head like a Nodal Ninja, if you’re after perfection. I’ve been getting decent enough results without one, and even shooting hand-held.

A tip I picked up on the web is that you should set your camera on manual exposure and manual focus to cut down on variations in the pictures which will make up the panorama. You obviously have to pick exposure settings to suit your scene and then dial these into your camera, once it has been set to manual.

The next step is to focus the camera correctly and switch off auto-focus so that, providing you don’t alter the lens’ zoom setting, it will hold the same focus until you’ve finished shooting your panorama sequence.

You then take the pictures for your panorama, taking extreme care to keep the camera level between shots and that each shot overlaps the one before it by about a third. One way to help keep things level is to ensure that your viewfinder markings are always in exactly the same position with regard to features in your scene. An example of that would be always placing the central focusing mark on the horizon.

Note: You can shoot either in landscape mode or, as I prefer, turning my camera on its side and shooting in portrait mode. That way gives you more picture if you need to crop the picture after stitching it.

Another tip that I picked up from Episode # 23 of Scott Kelby’s D-Town TV show is that you can get much better results when shooting panoramas hand-held if you don’t keep your feet in the same position for each shot. I intuitively kept my feet and body as still as possible and just swivelled my torso when shooting a pano sequence to try and cut down on error.

I noticed I was ending up in quite a contorted position at the end of the sequence and it turns out that this twisting motion introduces error, so the component picture don’t stitch as well as they might. The solution, says Kelby, is to reset your feet every few shots so that you’re totally comfortable.

Hand-holding does work pretty but a Nodal Ninja, or other Pano tripod head, would still be the best solution.

_______
**The sample pano, at the top of this post, is quite an historic one because, if I were to try and stand in the same position today, I’d sink in 20 fathoms or so of seawater in Durban’s much wider harbour mouth. The new northern groyne can be seen at extreme left. The old north groyne was approximately where the pipe comes ashore, to the left of the digger.

The pipe was a temporary measure for supplying sand to Durban’s beaches. Dredgers would couple up to the pipe and discharge their cargoes of sand.

All that ground is gone; part of the 10-million cubic meters of material that will have been moved once the harbour project is complete in March 2010. See my Durban website for much more on our harbour.

More of my panoramas here

Doing full justice to a beautiful scene or the interior of a building is often quite difficult with normal cameras because their relatively narrow field of view makes it impossible to fit everything in at once.

The answer, of course, is to shoot the view in sections and to join these up together later.  In the bad old days of film, we would get jumbo prints and cut them up and, with  glue and a great deal of sweat and patience, you could come up with a picture that at least that showed the whole scene that had attracted you in the first place.

Now that we have digital photography and software programs that can join many pictures up into one, I decided to experiment with shooting some panoramas. I have used a number of different programs, including one given away free with Canon cameras, and Photoshop.

I started getting pretty decent results but there were occasions the programs would fall over and just refuse to join, or stitch, the pictures I had taken. In an online forum somewhere, I came across mention of a program called AutoStitch which, it was claimed, made the process of creating panoramas so much easier.

I went along to the website www.autostitch.com and found that the program is technology demo created by Matthew Brown and David Lowe at the University of British Columbia in Canada. It is free to download but is only available for Windows computers.

AutoStitch is only just over a megabyte in size and, to be quite frank, I wasn’t expecting all that much from it after I unzipped it into a folder and started it running.  To say that the interface has no bells and whistles is to put it mildly but, as I discovered, it has all the essentials.

You start by selecting the pictures that are going to go into making up your panorama and it puts those images together and shows you a low resolution preview of what it’s done.  If you like the result, you can go into the settings menu and increase the resolution of the panorama that it’s going to create.

The first set of pictures I fed into it were taken from the pier in front of Ushaka Marine World in Durban, and showed the work going on at the new North Pier and the remnants of Vetch’s Pier, made visible by the very low tide.

Photoshop had already flatly refused to stitch these pictures together but AutoStitch had no problem, and produced a very nearly perfect result.
The only real fault was that it missed out a child playing soccer on the beach and, instead, produced a little blurry patch where he had been.

I was even more impressed to find out that AutoStitch could not only cope with joining up a single row of images, shot from left to right, but that it could also join up more than one row of pictures, or even a vertical panorama.

AutoStitch is great and I will certainly be using it in the future.  The free demo version is only available for Windows computers but its’ technology has been licensed to a number of commercial software producers and there are versions that will run on Apple computers and Linux-based machines.

One of these, which I haven’t yet tried, is the reasonably-priced Serif PanoramaPlus.

** This article was originally published on my FishNet computing blog (don’t ask about the name, it was devised by a sub-editor).