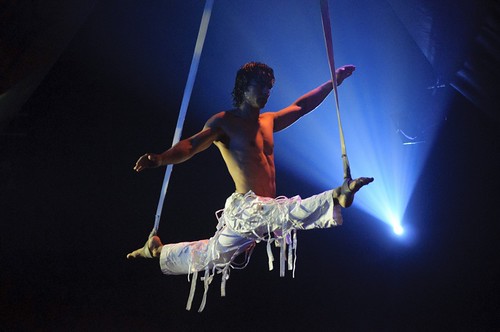 I went the el-cheapo Sunday afternoon matinee at the Barnyard Theatre at Gateway Centre in Durban, to see the show Rock Circus. The show was great but what made it even better for me was that the theatre management don’t mind you taking photos during performances, so long as you don’t use flash.

That suited me fine because flash ruins concert pictures as I found to my cost in my disastrous first (and so far only) paid excursion onto concert photography. That was in the dim and distant days of the early 1990s and I screwed up the shoot really badly, producing terrible washed-out pictures because the flash had been fooled by the dark stage and pumped out far too much light.

Fast forward to 2010, having shot a lot of performers in the interim, I had learned a lot. The most important lesson was that cameras don’t know that stages are supposed to be shadowy, to add drama and hide as much of the stage furniture, such as wiring and stands, as possible. Cameras will, if left to their own devices, try and eliminate the shadows, revealing stuff that you’d really rather not have in your picture, and they’ll totally blow all of the highlights.

Not a pretty sight!

I also learned that while it is possible to get good arty pictures with a long exposure and plenty of subject movement, my preferred method is try for a shutter speed fast enough to eliminate camera shake and, hopefully, to freeze the subject. I was shooting with my Nikon D90 and a 55-200mm lens and I decided that that I wanted to shoot at 1/200th.

My secret weapon in getting these concert shots was the D90’s Auto ISO feature which, I believe, is one of its most under-appreciated features. (NOTE: many cameras have it these days). You can tell it the minimum shutter speed you want and it adjusts the ISO setting to try and give you that, within the limits you set. The funny thing about it is that it carries on working even in manual mode, adjusting your exposure by varying the ISO. 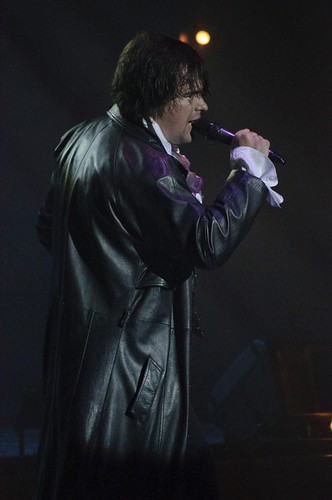 So, this is how I set my camera up:

After that, it was just a matter of waiting until the subject was well lit by the stage lighting and at the peak of action, when they weren’t not moving too much. And then shooting lots and lots of pictures to ensure that you end up with a decent selection to choose from.

There is no way to shoot noise-free  pictures at that ISO with that camera but it has given pretty decent results in the past. This time, I happened to be trying out Adobe Photoshop CS5 and discovered amongst its many cool new features, that it has superb noise reduction built-in. It eliminated all the nasty blotchy colour noise and left a result which looks all the world like grainy film.