Over the past few weeks I’ve been preoccupied with family medical issues and didn’t get the chance to write up a practice shoot I went on with a couple of fellow Strobists. We started out in an old railway station building and were shooting grungy detail pictures with our cameras mounted on tripods.

Little did poor Voden know that he was destined to be the model a little later in the day, on the wonderful graffiti-covered bench outside. A group of us have recently become disciples of Joe McNally and the holy Nikon Creative Lighting System which, if you use it right, can give you incredible off-camera flash pictures.

This picture was taken with Voden’s bare SB-900 flash gun positioned at 90° to the camera, directly in front of him, and slightly above his eye line. Tucked into the space between him and the bench was my SB-600 flash, set to put just a bit of light into the space behind his head. 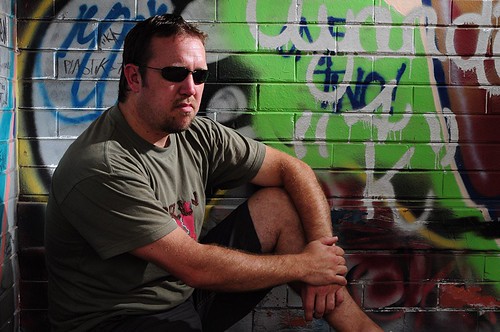 The next one was taken with the help of a single SB-600 which was snooted to limit the spread of light and concentrate it on Voden’s chest. 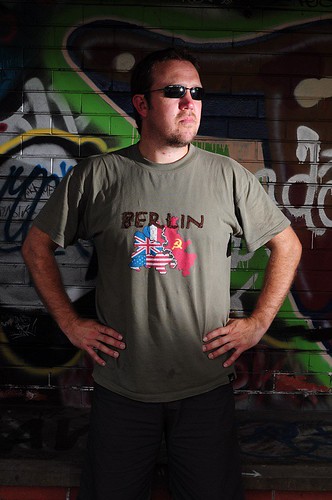 Shots like these are more than possible with flashes fired by simple radio trigger, with their output being set manually, but there’s nothing to beat controlling everything from your camera and rapidly achieving the effects you want. We were shooting Nikon D90s, which allow you to use the pop-up flash to control the output of any number of remote flashes.

I suppose it might have taken two or three minutes from the time the first exposure was taken, to the time I was taking pictures I was happy with. The screen on the back of the camera is more than good enough to check whether the light is correctly positioned and of the right intensity.

The good news is that there is now an add-on trigger system available, called Radio Poppers, which converts the light pulses controlling the flashes into radio waves. You need to buy a Radio Popper PX transmitter for your commander unit and a PX receiver for each flash. You’re then able to place your flashes anywhere up to a couple of hundred meters away, and control them from your camera.