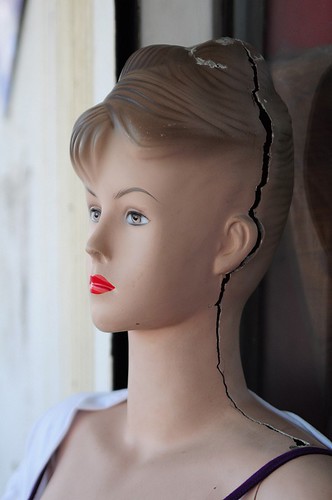 The quality of the kit lenses we get with our cameras these days is generally pretty good and so are most of the less expensive consumer zoom lenses available from the various manufacturers. These can all be used to used to produce great pictures but, as I’m discovering, they are all lacking in one particular way, which may or may not be important to you.

In the old days, when I devoured lots of how-to-do-it photography books, there was always a section which dealt with differential focus, and how you could take pictures with a narrow depth of field to draw extra attention to your subject. The idea was that the area of interest would be in focus and that everything else would be more or less out of focus.

This way of isolating your subject is very cool, in my opinion, but the sad fact is that it is a very difficult effect to achieve using a consumer zoom, unless you’re shooting at close to the lens’ minimum focusing distance. The depth of field captured by consumer zooms, which often have maxium apertures of only F5.6, or even smaller, is just too big. The problem gets even worse on crop-sensor cameras, which capture a greater depth of field than larger-format one, even using exactly the same lenses.

The way to get a shallower depth of field is through using lenses with larger apertures, such as f/2.8, and I have been fortunate to acquire one recently. I have reported as such in these pages and, if you look back to the post here, you’ll see that I bought the Tamron 28-75mm f/2.8 for use in shooting people in low light. A larger aperture certainly means that you can shoot in a fraction of the light required by lenses with smaller apertures, and my early experience with my lens bears this out.

I kind of also knew, in an intellectual way, that the lens would have a narrower depth of field when shooting it wide open at F2.8. I didn’t realise just how profound the effect would be and how many creative possibilities it would open up.

The picture at the top of this post is not one of my favorites, but it clearly shows off how a lens with a large aperture can help your pictures, by making the background less obtrusive. The picture is pretty much as it came out of the camera and, if taken with one of my other lenses, would have had needed work to dial down the background.

Lenses with larger apertures fall under the heading of fast glass and they would include ones with an aperure of F2.8, or greater. I must say that I’ve become hooked on the use of fast glass in a very short period, but the bugger is that these lenses generally fall into the more expensive category because they have more glass in them, and are built ruggedly to withstand the rigours of professional use.

Given unnlimted resources, I would probably get the Nikon 14-24mm f/2.8, the 24-70 f/2.8 and the newly announced 70-200mm f/2.8 VR II. I heard someone refer to them as the Holy Trinity and I think they certainly would be a dream team if you had the dosh, and could tolerate the 3.5 kilograms in your camera bag.

Fortunately, there are a couple of options for those of us less well-endowed in the wallet department. Options like, for example, the Tamron I bought. There are others from the independent lens makers who all offer 80-200mm f/2.8 zooms, and there is at least one wide angle 17-55mm f/2.8 zooms as well.

At the moment, however, I’m not looking too hard in that direction, because there are other fast lenses out there which can be had relatively cheaply.

These are prime lenses which, while they do not offer the ultimate in convenience like a zoom, are faster than most zooms, with apertures of f/2.8, or even bigger. They have a single focal length and so are easier to design and cheaper to make, and offer great value for money. Canon and Nikon both offer f/1.8 50mm lenses for a bit over $100 and both have a range of other relatively affordable fast primes, including wide angles, and longer 85mm and 135mm lenses.

For the time being, I’m going to be shooting my 28-75mm and backing it up with my slower zooms when I have to. I’m definitely going to be looking at other fast lenses in future.

In the meantime, another disturbing thought has occurred to me: ‘The depth of field produced by my Tamron is going to be even less if I used it with a 35mm film camera. Hmmmmm!’

5 thoughts on “Fifi and the fast lens”