One of the few pleasures left in life, now that the sugar, fat and salt have been denied to me, is photography. [ I may have mentioned this before 😉 ]

When I can’t actually be out taking pictures, I am very often to be found looking at them, and one of my most frequent online destinations is the photo sharing site Flickr.com. It’s where I display my personal pictures and regularly check in to see what friends and contacts have been up to.

This column is not about us individual photographers however, but about organisations who are using the site to post their pictures. Quite by chance, I came across pictures posted by the U.S. Army Materiel Command, which included the greatest inventions of 2008, and showcased the XM-153 Common Remotely Operated Weapon Station. 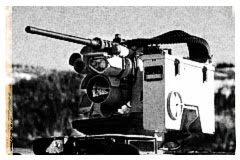 I challenge any man to see this thing and not have visions of setting one up to cover the approaches to his house, and using it to blow away the baddies as they come sneaking up the driveway. Anyhow, my interest was aroused, and I went looking for other organisations using Flickr to host their pictures.

There is no direct way of searching for these, but I did find quite a few including the US Marines, who post a variety of current pictures. Another is the media section of the NATO International Security Assistance Force in Afghanistan (ISAF) and, although I should be getting used to the Internet by now, I still find it incredible viewing pictures taken the day before in a war zone halfway across the world.

Moving away from organisations for just for a moment, I also discovered that one can find collections of pictures on Flickr on just about any topic, by entering a key word into the search box. I managed to find pictures on such diverse subjects as Camp Bastion, Hurricane Katrina, the aftermath of the attack on the World Trade Centre on 9/11, and the London Eye.

But back to the topic, I was surprised to find that there are a number of heritage institutions using it to post sections of their photograph collections online. These include the Library of Congress, the Smithsonian Institute, the Imperial War Museum, and an apparently growing number of others.

They have a dual motive in posting their pictures to be viewed by a wider audience. The first is to share their pictures, which such institutions like to do, and the second reason is that the viewers might know more about the pictures than the institutions themselves, and contribute this knowledge.

Visitors to the site, seeing anything they recognise in a picture, are asked to add a tag, or keyword, to the picture and, if appropriate, some information in the form of a comment. This area of Flickr is known as The Commons and a note at the bottom of the contents page says it all; “Any Flickr member is able to add tags or comment on these collections. If you’re a dork about it, shame on you. This is for the good of humanity, dude!!”

One amusing thing I found in the Library of Congress collection is a colour picture of a couple of people hanging out backstage at the Vermont State Fair in 1941. Off to one side, there is a young boy kneeling with his back to the camera.

There is speculation in the notes on the picture about what he might have been up to. One commenter said he was probably playing with matches, because he looked like her twin brother had looked, as he set fire to their mother’s trailer home.

The pictures in the Commons are displayed on condition that there are no known copyright restrictions on them. They may be in the public domain, the copyright holder may have decided not to enforce copyright, or it may be unknown if there is a copyright holder.

I’m no legal expert, but I interpret this to mean that you are broadly safe to use the pictures for your personal purposes, but you might find trouble if you started selling posters, and the copyright holder suddenly appeared.

I had meant to do this column on a completely different subject, but when I sat down to do my Internet research, I was distracted for hours by all the interesting pictures I found in the Commons. They covered all manner of subjects ranging from a group of workers in an Australian cake shop in the 1930s, to a glamorous picture of a woman, apparently used in a cigarette advert.

And, if you don’t get distracted by something like that, you have no soul.

Why not leave a comment by clicking the link below?
.

3 thoughts on “Exploring the Commons”