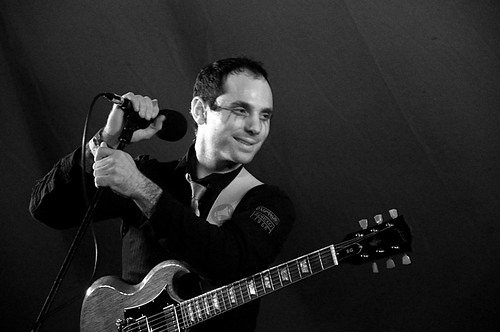 On 1st August, we went off to a gig at Pecanwood in the bush somewhere near Merrivale. Much to my surprise, it turned out that the bill was being headed by the Parlotones who are South Africa’s biggest group and, if I’m any judge, are going to make a big dent in the world charts. What was even more surprising was that we managed to get permission to shoot from the VIP area directly in front of the stage.

The bad news is that the lighting conditions were apalling and it would have been easier to shoot a black cat in a coal cellar at midnight, than those Parlotones. I took close to 500 pictures of them and the supporting bands and came back with very little I feel proud of. I did get a fairly decent picture of Parlotones lead singer Kahn Morbee, so I didn’t feel too bad.

On searching through the shoot pictures for something decent, I came across the following, which brought forth a smile. At least she emptied her glass (plastic??) first. 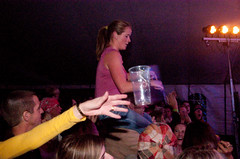 For future shoots in coal cellars, I have acquired a secret weapon, of which, more anon.