I came across a press release from the Concrete Manufacturers Association that the new stadium had won an award. That’s impressive whether you agree or not on the fact that its being built in the first place. The following is taken from the press release: 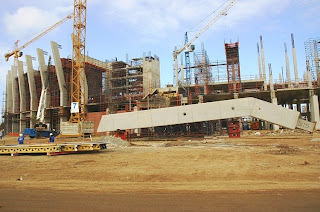 Straight and raking precast concrete columns were used for the construction of the Moses Mabhida Soccer Stadium. The façade incorporates cast-in-situ columns with anchor bolts up to level 3.

Precast concrete columns, comprising a stub at the base and an upper section, were placed above the in-situ columns. Steel base plates on the stub columns were custom-designed and fabricated on site to correct any discrepancies in the anchor bolts.

At 15m long and weighing up to 65 tons each, the columns were manufactured on site to exact specifications and tight dimensional tolerances. A total of 30 raked columns of varying skew angles and 200 straight columns were deployed. The weight of the straight columns held them in place, whereas the raking columns were further secured by means of a push-pull tie on the field side of the bowl. The ties were removed after the upper slab, which was tied back to the column, was in position.

Through careful calculation, using a small working model for demonstration purposes, it was determined that if the precast concrete columns were lifted slightly above the centre of gravity, they would be aligned for positioning onto the stub column.

Once the columns were correctly positioned and bolted down, the splice slabs were shuttered and filled with concrete, and the gaps grouted. The completed columns were topped by steel caps. These support ring beams which transfer the vertical and high horizontal forces off the roof.